The Legend Of Maxx Wiki
Register
Don't have an account?
Sign In
Advertisement
in: Characters, Magic Creature, Dryad, NPC 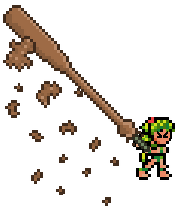 June, first appearing in comic #146 is a Dryad who came from the Jungle of the Dryad. She is quite aggressive and easily angered. June is short for Juniper.

June is generally very pessimistic, antisocial, and violent. Although she usually appears either bored or angry, early on in the comic, before June got to know Maxx well, she was actually shown to be surprised and scared when Maxx nearly shot everyone in the head with a musket.[1] After this, June became used to Maxx's stupidity and has never reacted the same again, instead just getting angry and injuring Maxx.

At home, her hobbies were practicing her Dirt Rod technique near the town's water supply, bending saplings so that they'd grow into lewd shapes, practicing trombone near Elder Fungus' house during his daily tai chi sessions, and climbing to the top of the lewdly-shaped trees during storms and hoping for death.

June is the Dryad Princess, though she escapes her duties by traveling and not staying around the Dryad town.

Her parents died when she was young.

She got in a fight with Aley, but they made up after he agreed to make her a Tom Collins. However, he didn't know what that was so he went through a long and exhausting process of making it and ended up making a drink which made Cyril stupidly brave and horribly romantic (showing his feelings) towards Hannah.

She owns a magical Dirt Rod (introduced in comic #153) that can turn dirt into various giant weapons; It was revealed in the Xane and Xlyan arc that she gets it from nearby dirt sources.

It also caused an avalanche to kill the Pygmies.[10]

Community content is available under CC-BY-SA unless otherwise noted.